Sacco and Vanzetti and the American Experience 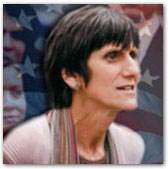 In the spring of 1997, I spoke with Congresswoman Rosa DeLauro (Connecticut) about holding a commemoration of the seventieth anniversary of the execution of Sacco and Vanzetti as part of the annual celebration of Columbus Day. New Haven is where I was born and raised.

Congresswoman DeLauro and I agreed that the event should be held at Yale University Law School. Dean Anthony Kronman welcomed the idea. So, too, did New Haven’s Mayor John DeStefano. Guido Calabresi, the Law School’s former dean and currently judge of the United States Court of Appeals for the Second Circuit, agreed to participate in the program.

The program had two parts. In his welcoming remarks, Dean Kronman reminded an overflow crowd that the Yale Law Journal was the first to publish an article on the unfairness of the trial and the treatment of both men. The faculty, including Professor William O. Douglas, also led the effort among the nation’s universities to protest the execution and to seek a pardon from Governor Alvin Fuller.

Congresswoman DeLauro, in very personal terms, described the revlation-expressed only recently to her-that as a child her mother had been told by a family member to destroy her collection of articles about Sacco and Vanzetti for fear someone outside of the family would see it.

Mayor DeStefano chronicled the declared state of emergency in the city, the widespread presence of police, and the prohibition on the issuance of any permits for meetings or rallies. He also added that, nonetheless, thousands of people in the heavily Italian and Jewish neighborhoods remained in the streets, saddened, uneasy, and some in tears while waiting for the moment of the execution. It came a few minutes after midnight.

Among those who remembered that night was my Aunt Rose Proto Sansone. She was eleven years old at the time. She stood outside her house with her father, Christopher, and her brother-my father-Matthew. He was fifteen years old.

Within the first part of the Yale program (see the program brochure below), my responsibility was to set out the “Legal and Historical Setting of the Trial.” It also was a welcomed honor to share the program with Professor Richard Gambino.

In addition, at the conclusion of the program, Anthony Riccio-a historian and author of a book (then in draft form) titled Portrait of An Italian American Neighborhood: The North End of Boston (1998; reissued by Globe Pequot Press in 2006)-approached me to discuss my talk. In one draft chapter of his book, he had chronicled the reactions and thoughts over time of the now elderly residents of the North End to the trial, execution, and funeral procession of Sacco and Vanzetti. He affirmed my experience. There was a reluctance to share the story and disquieting unease that the elderly Italian immigrants felt about the meaning of the discrimination directed toward both men.

The second part of the Yale program was a dinner for the participants and other invited guests held in the President’s Room in Woolsey Hall. Judge Calabresi was the main speaker. The evening included the live presentation of three songs from an English translation of the Dutch musical, Sacco and Vanzetti: A Dream to Many, which was described in my presentation to the Dante Alighieri Society. The music was sung by Brian d’Arcy James (as Sacco and then Vanzetti) and by Anne Runolfsson (as Rosina Sacco). They were accompanied by Georgia Stitt at the piano.